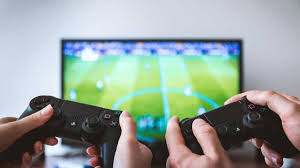 With video game technology advancing so fast and so far from where it started, one can’t help but to entertain the idea of where it’s going to go from here. After all, that is part of a larger creative process and we’d like to think that our writings contribute even in some small way. One of the earliest video games that we can remember is Commodore’s “Pong.” But never did we think the industry would have reached the point where it is today.  One thing is for sure however, and that’s the gaming is pushing full force ahead.

Today we did a little fantasizing to see where our imagination and desires would take us.

The following offers some suggestions of what could be done short of a little thing called, “impossible.”

We’re a little intrigued with the “Sun Game Glasses” idea. Wearing a pair of dark sunglasses and using the technology implemented by Nintendo’s “Wii” system, we could literally watch a game take place right before our eyes and then interact with it using a device that’s about the size of a pen. Since this isn’t exactly a new idea, we’re curious to watch what develops from University of South Australia’s ‘ARQuake’ project[1] – a springboard for this kind of gaming to develop in the near future for sure.

Another cool idea we’d like to see erupt within the gaming industry is the ability to talk to the characters inside a game. Some games allow players to textually speak to game characters already, but we’d like to see this pushed a little further. We’d like to be able to orally interact with characters: ask questions, joke around, warn and speak to them as if we were speaking to another human being. And we’d like to hear these characters talk back! It’s the ultimate artificial intelligence opportunity and although it would probably be years before this technology would be available on a wide scale, we’re sure it would be a hit.

Will we ever get to the point where we can play inside a simulated environment the way the characters in Star Trek: The Next Generation could play? Virtual reality is getting close, but the reality of the simulation is gone the moment we put on the silly-looking goggles and gloves. In order for simulation of this sort to work, there has to be as little a barrier between gamers and the game as possible. We don’t what to just think we’re inside a game, we want to feel that we’re inside a game and to be honest, we don’t want to have to go somewhere outside our home to do so.

The television or computer screen will suffice for now, but in the future, we’re going to want to be surrounded with the elements that make gaming the wonder that it is today. We’re going to want to transform our dens or bedrooms into a virtual alien ship or simulated jungle. In short, we want a new world.

One possible obstacle to bringing this fantasy into our living rooms is public acceptance. Would the public be ready for such a high level of entertainment? And could the public handle it? Immediately following Nintendo’s Wii release, customers were ready to complain that they wanted their old controller back! So as with any new development, there will surely be unintended consequences and although we’re gung-ho for these types of advances, we also share concerns about the impact it would have on an audience that isn’t “virtually ready.”

As a result, we can certainly envision a few laws introduced that restricted the use of our fantasy gaming. We already have some laws that attempt the same now and in our opinion, that’s a good thing. The last thing we want to encounter in gaming is physical harm – especially when we’re trying to enjoy virtual entertainment.

Online casino and gaming merchant accounts tend to offer huge possibilities for revenue and return. Most merchant account providers become skeptical towards casino/ gaming merchants as they are not only high risk but are also capable of posing a problem later with high volume sales, potential chargeback, refunds, and frauds, etc.

iPaytotal’s specialization is in providing the best merchant account facilities to our local as well as offshore customers with high-risk management. Our payment gateway provides the user with the virtual terminal that acts as a terminal for multiple users and merchants.

Upon approval for casino merchant accounts, merchants remain with the same merchant account representative throughout their relationship with iPaytotal. Our merchant account managers and technical support experts are available Monday through Friday from 8:00 a.m. until 6:00 p.m. GMT. All inquiries after business hours will be fulfilled the next business day – guaranteed.