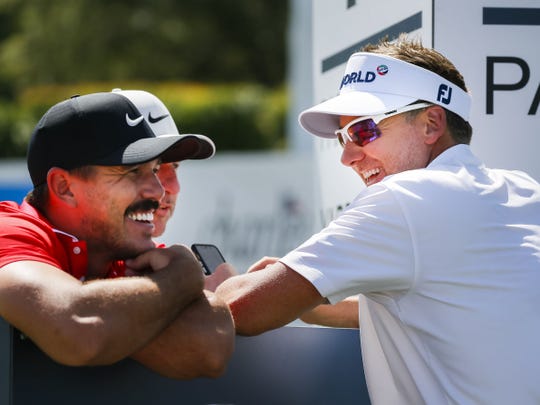 There will be no spectators at this week’s Charles Schwab Challenge, but there are plenty of stars.

The return of the PGA Tour after a three-month break due to the coronavirus pandemic has attracted one of the best fields ever assembled at Colonial Country Club in Fort Worth, Texas.

The top five players in the world rankings are there, and so are 16 of the top 20. About the only marquee names not around for this historic week are Jupiter Island’s Tiger Woods, Tommy Fleetwood of England and Adam Scott of Australia.

Of course, world rankings have never meant less after such a prolonged break, but it’s obvious American fans aren’t the only ones starved for sports.

So are the world’s top golfers.

The tee sheets at Medalist, Bear’s Club and Dye Preserve will be a little light this weekend when you consider all the Palm Beach and Martin county pros who have made the 1,284-mile trek from Palm Beach International Airport to Fort Worth.

The PGA Tour didn’t waste the opportunity of a stellar field, grouping No. 1 McIlroy with No. 2 Jon Rahm and No. 3 Koepka during the first two rounds. It will be 91 days since the PGA Tour held an event, abruptly canceling the Players Championship after the first round March 12 because of COVID-19, and they’re trying to put show ponies together.

“I just want to get back out and play,” said McIlroy, who plans on entering the first three events of the reconfigured schedule that has shifted the three remaining majors to the fall.

“Obviously, we’re going to have to take as many precautions as possible, but I think we have a great plan in place and it’s our responsibility we do this right.”

Golf is fortunate the nature of the sport and the size of its “office” lend it to social distancing. It will be odd to not have fans cheering their good shots, and no doubt it will take time for player and caddie to not huddle too close and fist-bump during the round, but the show will go on.

Every player and caddie at Colonial had to undergo a COVID-19 test before leaving their home. Another test was performed when they arrived in town, and their temperature will be monitored throughout the week. If a player tests positive, he must withdraw from the tournament and can’t return to action until he tests negative twice.

“Am I worried about getting it?” said the 61-year-old Browne, who’s in the field as the Colonial winner in 1999. “I’m not. We’ve done what we’ve done the last three months. It’s time to get back to work.”

The rust shouldn’t last long. The Tour is planning on holding events each of the next 13 weeks, including the season’s first major, the PGA Championship, at Harding Park on Aug. 6-9. The U.S. Open will be held Sept. 17-20 at Winged Foot, and the Masters has been shifted to Nov. 12-15.

In a sense, this is the Opening Day golf never enjoys because its offseason is so short. Most of the top players say three months is as long as they’ve gone without competition (unless injured) since playing junior golf.